An impression by Rashid Novaire.

As a writer and as a man, I was looking for story with Ubuntu in the house of my relatives. Because Ubuntu, as I now know after travelling through South-Africa, means; “I am because you are.”

In 2007, when I was in New York, I read a quote on a poster for a theatre play. The quote was from a Malinese woman and it read; “In every conversation there are four people. Me, you, the person you make of me and the person I make of you.” The story of my descendency relates to these words.

I am a descendant of the Touargas, a group of servants to the Marrocan king in the 17th century. The group was selected by lord Moulay Ismael, from the Touaregs and Baala tribes; whose origins lie in the desert and West-Africa.

2007 was also the year, that I wrote ‘Afkomst’. A book in which I investigate the political preferences of my German roots from my mother’s side during Nazi-Germany as well as the migration story from my father. His journey took him from North-Africa to cityhall in Amsterdam, where he played Nathan der Weise van Lessing. During the process of writing, whenever I would work myself into a dead end doing research, I would follow my fantasy. I found out that my father had been given away for adoption as a baby in Rabat and, having become a character of my own book, I walk backed into the past to take the baby and put it in the arms of my German great grandmother. This way, while nursing an African baby, she wouldn’t raise her own children to become the nazi’s and racists that history has proofed them to be.

Today, in 2018, I joined in on a workshop at Black Renaissance about Ubuntu – under the flag of dignity, resilience and justice. Black Renaissance. A musical piece by Harry Whitaker. The name under which the second ‘Black Achievement Month’ was launched in cityhall and also the name under which Dutch artist Patricia Kaersenhout organises meetings during which thinkers from all over the world share insight with people who want to connect with both Western as well as non-Western knowledge. Events organized by black renaissance are exactly about these tensions between registration, experience and context.

The Ubuntu philosophy is about fully embracing a collective, undivided relationship of unity.

“ This collective unity – or Ubuntu – is more than just a theorethical idea of relationships, it’s the mental and physical awareness that a person can only be, because of the collective. Both in material and metafysical sense. The only way to Ubuntu is together. Including our ancestors and the cosmos.”

Ubuntu based knowledge is sourced from all over Africa. Ubuntu philosophy in justice systems. Ubuntu as an art form. Ubuntu is nevertheless, sadly overlooked in schools and universities in the continent. Grace Ndjako, philosopher and assistant teacher on the University of Amsterdam, focussed her presentation on this gap regarding the ubuntu philosophy, in the context of non-western knowledge in the Sub-Saharan African educational system. Instead of a story organically constructed as a combination of European and African philosophy, the Eurocentric perspective stands central. Students learn about Socrates, but Ubuntu and great African philosophers like Mmembe are not mentioned in the classrooms. By only mentioning historical aspects of our history but leaving out the cultural heritage, we will lose these ideas from our collective memory. By just teaching about Kant and the old greeks, students are losing touch with their own culture, as they are presented a presumably universal history, but which they experience much differently. At the same time the knowledge and cultural heritage of these Congolean, Kenyan or Senegalese students is completely ignored. How do you bring back something that is tenderly forgotten or brutally erased, back into the collective awareness of a man, woman or a society, an ‘us’, which is, as Ndjako stresses, the most common noun in the Ubuntu philosophy?.

This is a question for the Black Renaissance.

Although some knowledge is lost and stays lost, I think about my ancestors who had their own language; Torogi. During my families last visit, one my uncles spoke it, while he was singing and chatting during his push-ups in within sunbathed space between the royal walls. The light is slowly fading in the studio, but there are not yet shadows.

It is judiciary sociologist Nick Huls, who brings up a movement of people who want to step out of the shadows of their history. “Because an urge to reform the past seems to be in the air”(Galanter 1992). These people want to re-breath history. Share knowledge about past crimes. And don’t rule out compensating measures for the unhumane consequenses of colonialism. Groups who want to right old wrongs.

As a teacher in Pretoria, he always looked for African thinkers to join his colleges. He learned about alternative societies outside of the European model. Societies, like certain African cultures, where aging doesn’t exist. Ramose Mogobe, the writer of Ubuntu, that will be presented in the public library that same evening, also states that altering your perception of time cannot undo injustice. Increased attention for past suffering and present debates lead by emancipated groups, leads to an increased focus on compensation payments in the debate. Hulst mentions a thirst for cultural decolonisation. He also mentions a progressive law in South-Africa that limits the majority vote, in order to do justice to landlaws. He also mentions a deal from Nelson Mandela’s government about political power for black people, although land remained mainly in white hands.

The faces in the audiende clearly reflect momories of their own travels and wanderings through hiddesn histories, while Huls continues about the widows of Rawagede in Indonesia who were compensated by the Dutch government. Realising that the Dutch self-image isn’t correct leads to a conversation in which opposing parties fight with each other and each other’s images until they become enemies.

Nick Huls also adds that the whole topic of compensation around slavery is delicate, as some people are descendants of both the enslaved and the slave-traders. Should you compensate them as well? A woman on the first row pulls a face and think I can read her mind; ’Those people are the result of rape’.

Compensation should be a keyword within a Black renaissance.

But in which form? What can Ubuntu teach us, for questions like these? From a standpoint of collectivity it seems that society as a whole should be compensated for the destabilisation caused by colonialism. Kaersenhout mentions that it is the decade for people of African Descent. Huls says that 90% of the teachers at Pretoria university where he teaches are white, whereas 70% of the students is black.I think about collectivity and don’t understand his remark of 90%/70%.

I think about the books of great thinkers, but also about the stories of passerby’s who are waiting for me and my eyes and ears. I also think about the man that I once met in the twilight early evening, who pointed at the sky filled with pink and purple lines and said; ’Lord, help me to understand life a little bit better’.

That was in Botswana.

I’ve never been in Mali. 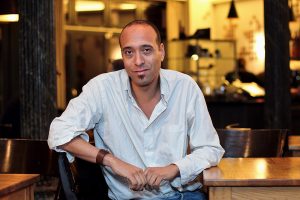 Rashid Novaire is a son of Morocco and of the Netherlands. He debuted with a collection of stories called; ‘the herons of Cairo’ which read as a tour around the world and a trip inside your head. Five novels followed. The most recent one  ‘Zeg maar dat we niet thuis zijn’, is about an undertaker who has to bring back a body to the middle east because of a white lie. He has written stageplays for among others the Bayerisches Statetheater. And this year he will bring out a novel about the Hausmaedchenheimschaftsaktion in the Netherlands in the 1930.

Change Location
To find awesome listings near you!